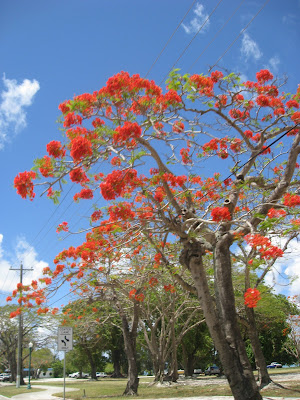 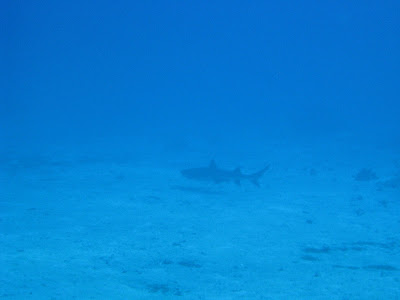 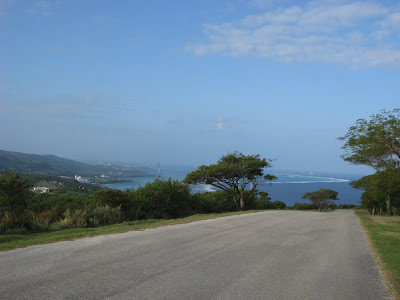 . . . my Sunday morning bike rides from Hyatt to Suicide Cliff with Crystal and Lorrie. 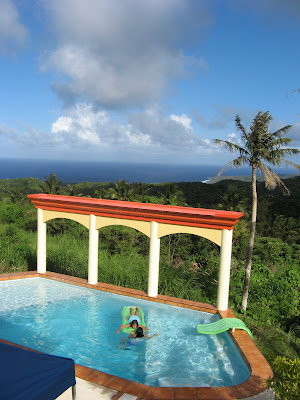 . . . standing on Mark and Tammy's terrace that overlooks their beautiful pool and Lau Lau Bay. Can you imagine coming home after working and having this view to look at everyday!? 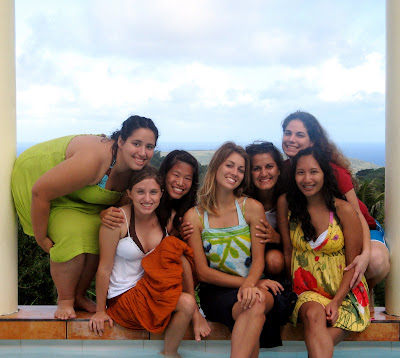 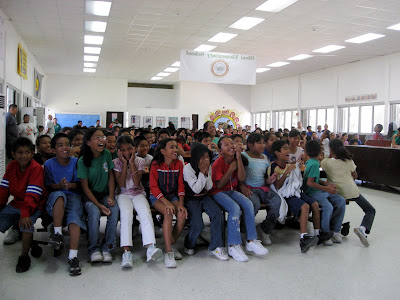 . . . hearing the kids have a big belly laugh at our drama skits. Real Christian is getting ready to perform at the schools in Palau. 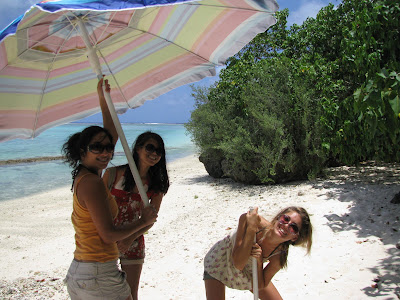 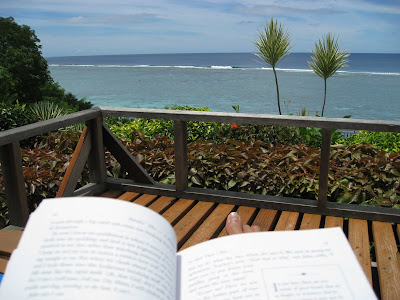 Lately I haven't been scuba diving or mtn biking on the weekends. To shake things up a bit I've just been reading and enjoying the sun. Amy and I usually hang out at Pau Pau Beach or the spa on the weekends.

One of my New Year's resolutions was to read more and I'm really happy that I've kept up with it. We started a small book club that meets every 2-3 weeks. At our book review sessions everyone brings something tasty to eat. I always look forward to Vero's Cuban desserts!

This past Saturday night we all huddled in a circle on the floor and reviewed the book Love in the Time of Cholera. The power was out so we had to light candles in the room. Losing power still didn't keep us from having great conversations and a chance to bond over one of our favorite passions - literature.
Posted by Bev at 9:12 PM 3 comments:

Meet You Where You're At

As I kneeled on the platform one by one the hands of my friends and family touched my shoulders as my pastor prayed for me. A million things were going through my head during my missionary dedication that took place at the Garden Grove SDA church almost two years ago. I was about to embark on spiritual journey.

One thought was how will my spiritual journey in Saipan change me? I knew that change was inevitable but I wasn't sure exactly how I would change. As silly as this sounds I was scared God was going to turn me into one of those REALLY religious followers. Some people refer to them as the "bible thumpers". I really dreaded that thought. For those of you who really know me, know that I'm more spiritual than religious. I simply just wanted to follow God. And I wanted to dedicate the years that I'd spend here to learn more about Him and to share with others what He has done in my life.

First off, I had this idea that missionaries had unshakable faith. I also thought missionaries always came back home stronger in their faith after serving time in the mission field. I have learned that being a missionary doesn't make you any less susceptible to experiencing weak moments and doubts. There was a point when I even questioned the existence of God and the existence of organized religion.

My spiritual experience in Saipan has been the hardest point in my life. It has challenged me to think about what It is I actually believe not just what I was taught all of my life.

Though I struggle with my spiritual daily walk I know that no matter what phase I am in my walk . . He will always meet me where I am at.
Posted by Bev at 9:51 PM 3 comments:

Yes yes, I have been slacking off a bit.

Firstly, I dislike CUC. I'm REALLY irritated with the rolling black outs. It would be nice to have a nice dinner at a nice restaurant and not worry about the power going out. Or it would be nice to play our championship volleyball game without the lights going out in the middle of our last set. Thats right, the lights shut off at Ada Gym during what was suppose to be our last game of the season. We had to reschedule or last game a couple of days later. When the power goes out some schools actually shut down and send their students home. Such a shame that CUC can't get it together. 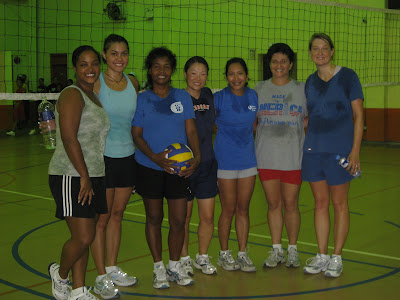 Well at least our team, the Yoyo's, defeated the Pikan Gaga girls in the next round. Thats right, we sweat like men! We are the champions!! Woo hoo.

Secondly, I have a new crush! j/k Jake Shimabukuro. My favorite song of the night was Let's Dance. He's the most amazing Uke player ever! 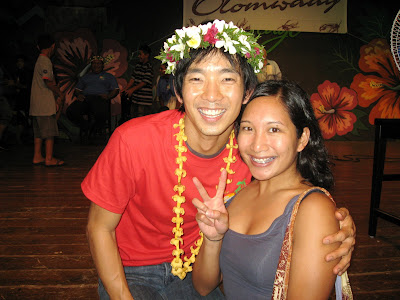 He's brilliant! His performance at the Beautify CNMI was absolutely magical. The VIP seating was totally worth it! He's just really passionate about music and I love that he encouraged the youth to follow their dreams. What an inspiration. Also, Gus and Jun, performed some medley's on their Uke's which I adored.


Thirdly, I planned beach vespers at Ladder Beach and beach volleyball night at PIC for the SDA Youth group with the help of Amy, Mai, Judith, Jessica, Rikki, and John. 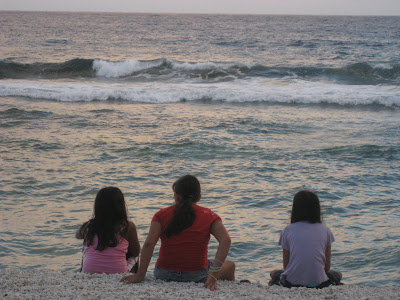 One of the goals this year was to try and combine the youth at our central church with the newly built Kagman SDA church. The girls from Kagman are sooo shy but I think they are starting to break out of their shell. We were just happy that they were able to make it to our vespers. 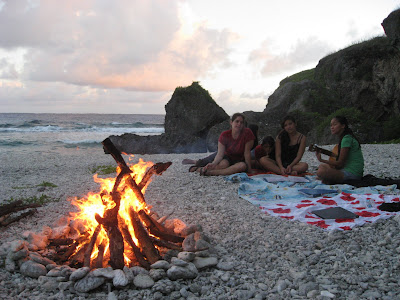 Joy played melodies on the guitar while we sang a couple of our favorite praise songs. One of my favorite songs is Grace like Rain. Its kind of the youth version of Amazing grace but a bit more upbeat.


We had yummy veggie haystacks for dinner and just enjoyed each other's company. The sun was starting to set. I paused and enjoyed the view. Before we knew it was dark and the stars covered the entire sky. Some of the kids saw a shooting star and I heard them laugh and wish. . . Wow, it was a beautiful night. 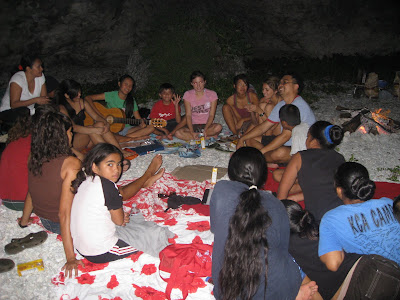 John talked to the kids about making plans and where God fits in. We went around in a circle and talked about our plans. The kagman kids had great dreams. Some wanted to be a teacher, a policeman, or in the military. Some of our kids wanted to be doctors . . . Me? I guess I have goals but I'm not one to make plans. I dont' even know where I will be at the end of this year. I said I wanted to travel for a bit. See more places that I didn't know much about. Thats about it. 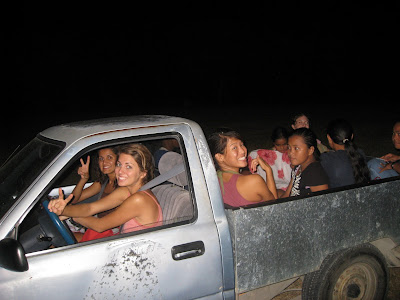 After we closed with prayer we toasted marshmellows and made s'mores! The perfect ending to a perfect night. 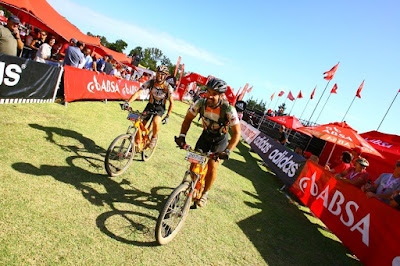 It's probably the hardest mtn bike race in the planet and the mother of all stage races. He averaged on the saddle about 9 and a half hours and sometimes ten hours on his bike every day! So proud of him and his partner Rou! Mtn biking rocks. I gotta find a crazy partner to do this race with me before I turn 35. I've got five years. =) *nudge nudge* Crystal! 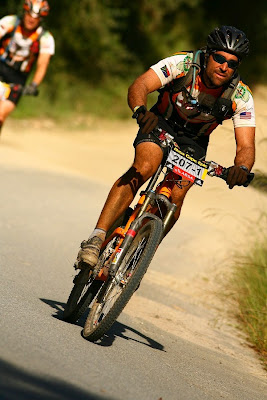 I've been thinking a lot this past week. Stay or go!? Stay or go?! I'm going crazy. Leaving Saipan is a bittersweet feeling for me. I could stay another year but I'm hesitating. Something doesn't quite feel right. I just think it is time for me to move on.

Maybe I have island fever. I just know that I can't hack it here till Sept. So, my early departure from Saipan will be on the 19th of May since I have to go home anyway for my best friend, Michelle's wedding.

Real Christian Theater performs at the schools in Palau early May for about a week and then I'll work one more week. You know what that means?! I'll spend my last dives of this year in Palau! I'm so excited.

One thing is for sure, I came alive in Saipan. I'll never forget that here is where I learned how to truly forgive and how to trust God.
Posted by Bev at 11:43 AM 8 comments: